The deepest foundation of our physical world.

The spatial structure presented here as an ultimate matrix of physical space, as a medium for fields, as the basis of quantum dynamics, as space that does not allow motions at all (Einstein's requirement for a medium what replaces the ether) requires new paradigms .

Because of the better understanding, this article is divided into 4 parts
Part 1: The space matrix is explained and depicted.
Part 2: Questionizing the old paradigms
Part 3: The new paradigms are newly explained.
Part 4: Matrix theory explains particle as an oscillation.

In real reality everything is vibration. Only the resonance of this vibration creates our cognition of these things that makes up our reality. It creates the point, the line, the surface, the space, the time, the force and more. Actions in the immeasurable very smallest, result by trillion-fold repetition to the degree of probability that is recognized by us as our reality. It is this, that gives rise to the recognizable paradigms of physics.

This website is not written as an academic paper. It is intended to prepare the reader for the idea that everything that makes up our world is just oscillation of a medium, which in turn is just oscillation too. The basis of our reality is multidimensional, the matrix theory explains all phenomena 4-dimensionally and thus creates a unified picture of physics.

It is based on harmony and balance of the primal phenomena that generate space-time-pulse. These phenomena (axioms) exist from the beginning, but because of this balance in 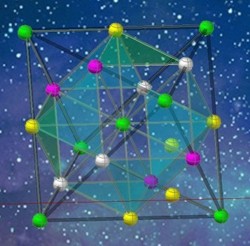 equilibrium they form a void, a non-visible, non-interactive substance of empty space. Only the disturbance of this system generates the reality of space-time-pulse. In contrast to today's physics, the Matrix-Field-Theory (MFT) does not begin with an absolute chaos of a big bang scenario but with an almost absolute harmony, which forms a perfect void by the equilibrium of the space-time-pulse axioms. The empty space is not empty; it is a system that in the state of equilibrium, in perfect balance, has no effect outside its system. Disturbances of the system, however, can form their own systems, which in turn can form superordinate systems in equilibrium up to an universal size.

Space is defined here by a geometric structure, the matrix, a vector-equilibrium,
Time through a perfect cycle in the matrix system and
Pulse by the resistance to leave the original state.

A Quora-Member asked me: What is the substance of the light?
Light is not a substance like a wave is not water. Not the hammer hits the nail, but the blow drives the nail into the wood. Light is the blow (the impulse), the hammer is the space and can transmit not only light, but also the unimaginable forces of a neutron star.

The open-minded scientist cannot avoid picking up notes on military field-powered objects as leaked information from classified research. It seems that theories are applied that are not taught in universities. The space-time matrix presented here is intended to provide the paradigm for this new type of research.