The geometric analysis of the medium

Terms are used here that are explained in the page Matrix

A medium that applies to all aspects of our physical world is a centuries-old goal of physics. As long as this is not recognized, our physical world consists of separate particles whose distances are perceived as empty space. The question of one medium for the particles and another for space remains open. Time and power remain unexplained if their effect continues to be viewed as tunneling under the Absolute Void. In my paper "The Matrix" a theory is presented that describes a medium that generates distance-time-force and thus becomes the basis of all physical events.

This matrix is a relational network of distances as a result of oscillations in the elasticity of scaled distances down to zero magnitude. This is not a circular argument here, but a generalization of the medium in that it is based on smaller scaled media, which theoretically lead to zero distances. The process of oscillation generated by this in turn at zero time and taking into account the Planck constant, to infinity force. The ranges of distances, times and forces are thus defined by this matrix from zero to infinity. 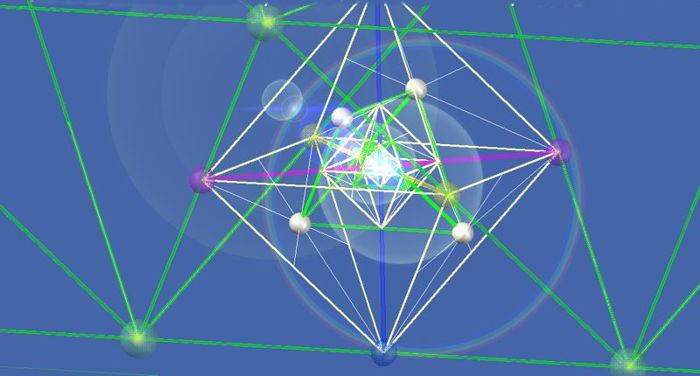 The basic idea was to find a spatial structure in which all values in terms of time and energy are scalable.

Space: Take a plastic bag with glass balls, connect their centers and you will see a hexagonal structure made up of tetrahedrons.

Force: The elasticity with which the original state of harmony is restored creates the impulse. With the unit time measure we get the frequency. Impulse x frequency creates the energy.

Until then, it sounds embarrassingly easy. However, it is only the tip of the iceberg. This is about a geometry that also includes time and power. Therefore, my paper “The Matrix” must always be consulted. It is all about a double oscillation in 4 dimensions, where push/pull can be found in the known 3 dimensions and time in the 4th dimension. The double oscillation produces 4 parities:
++ +- -+ - - . It is the 4 parities that add up to zero in every tetrahedron. So the tetrahedron is the unit of this matrix. The intervening octahedra (as a result of the arrangement of oscillations of these tetrahedra) consist entirely of parities of surrounding tetrahedra. The medium of the tetrahedron and octahedron are the smaller scales of the same matrix. Consult here space is oscillations

How are the base types tetrahedron / octahedron distributed in space? This is a purely geometric comparison.

Visible here is a cube, 2 nested tetrahedrons with an intersection in form of an octahedron and the residual forms a; b; c to fill up the cube. For the sake of math, a cube with side lengths √2 has been assumed, thereby producing interior distances of hexagonal directions of 1. We see that a central octahedron has a tetrahedron (green and magenta) on all 8 sides. We recognize that the parts (a) above (c) below and the parts (b) on the 4 edges are required to fill this structure into a cube. With a little imagination we see that the parts a; b; c are always ¼ octahedron in size. If the space were filled with cubes, then the ¼ octahedron with the adjoining neighboring cubes would again produce whole octahedrons on each side length and edge. Now the only question that remains is What is the volume of a tetrahedron.
This we finde out :

Such a measuring cube would have 4 octahedra and 8 tetrahedra divided into 24 parts, each part having a volume of 0.1178. It hints to a magic space-unit of 0.1178

Although mathematics based on partial voluma 0.1178 and an orthogonal space structure would be possible, this does not make sense. 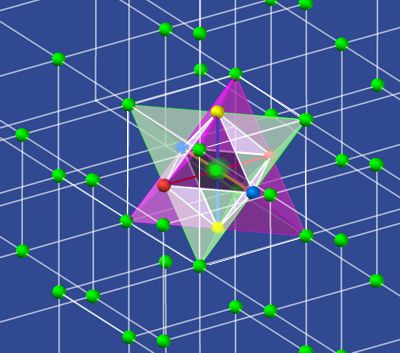 Due to the fact that the orthogonal space cannot add up to zero per tetrahedron units, its cube units never become transparent. It's an opaque space. Nevertheless, it is latently present as an orthogonal view in a hexagonal space, but energetically shows no effect. It consists of octahedrons, but these are energetically = zero, since all corners of the octahedron do not belong to it, but to the surrounding tetrahedrons. However, we recognize an orthogonal space structure based on (√2) in the central octahedron with its diagonals. This will be explained  as QUARKS in my paper Das LHC-Feuerwerk  (Large Hadron Collider)